Bahay Tanghalan: TA Online Festival is a celebration of performance in the online sphere which shall feature six (6) productions written by members of the Ateneo community, both within and beyond the organization.

Based on George Orwell’s novel 1984

71 years after its original publication, 1984 is no longer a prophecy; it’s now our headline. In “2039,” two decades after our present, truth has become mutilated, cyberspace weaponized, and power abused. In the totalitarian province of Ma-Yi (a country not called the Philippines), Winston Santos decides to revolt by staging the greatest form of rebellion -- falling in love.

Inspired by the Exodus narrative

What was once a reformatory school renowned for a cycle of abuse and repression that miraculously transforms wayward boys into morally upstanding young men, is now reduced to a lone priest and three unhinged juveniles. Then, in walks the priest’s prodigal brother, a career criminal, accompanied by the 10 plagues of Egypt. The confrontations that erupt force all five to question their relationships with penitence, with one another, and with the institution struggling to put them in their place.

Based on Edgar Allan Poe’s poem “The Raven”

Bitaw revolves around isolation and grief in a time of crisis. We follow the journey of Ben, an adolescent living with his neglectful father after losing his loving mother to the first wave of Covid-19. He struggles to maintain his sense of reality as troubling memories begin to haunt him. An apparition comes to guide him through his own mind as he seeks to find a way to salvage his relationship with his father, while also coping with the loss of his mother. Confrontation takes center stage in Bitaw as Ben learns to come to terms with his trauma.

Lamon-Babae is an online play inspired by the myth of one of the Philippines’ most fearsome creatures — the Manananggal. Set in the 17th Century, the story revolves around the origins of the Manananggal, questioning the perception of her as a monster. “Lamon-Babae” aims to push to the forefront women’s power to reclaim their freedom and agency, and the solidarity among survivors of oppression.

by  Alie Flores and Justina Estuar

For as long as love has existed, so has the desire to express it. Many years have passed yet lovers still find themselves involved in the same chase that is ligawan, be it through harana or late-night video calls. “Pana-panahong Pagsuyo” is a trip through Philippine history that follows the ever-changing forms of courtship. Defining relationships has never been easy, especially when the forces of history and society threaten to get in the way of love.

This modern retelling of a classic folktale revolves around the class officers of IV-Matapat as they turn a blind eye against the truth for the sake of their pride and reputation. Beginning with the case of a stolen cash box, a relatively tame issue transforms into a web of deceit and lies as the officers find themselves in compromising situations that force them to choose between the truth and their personal gain. What starts with playful banter and unjustified accusations eventually turn into manifestations of power abuse revealed through highschool students in a classroom setting. 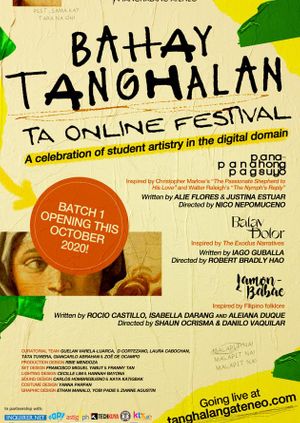