The #1 Series on GagaOOLala is now on KTX!

Enjoy all 9 episodes for the price of ONE. EXCLUSIVE FOR PHILIPPINE TERRITORY.

WARNING: THIS IS FOR MATURE AUDIENCES ONLY.

Each episode of UNLOCKED focuses on a different kind of LGBTQ relationship put to test under the lockdown in the time of the pandemic.

Andrew is mending a broken heart. He tries to busy himself with a lot of things to forget.On the eve of the quarantine, Andrew feels more alone so he decides to invite one of the rent boys he met online- Brix. As the night progresses, their conversations open up a lot of possibilities- healing and connection, lust and love and probably moving on. Is Andrew ready to commit again with someone like Brix?

Calvin wants to save his relationship. Drake feels tired and trapped. Will Calvin and Drake give it another chance? Will their love see them through?

Or will it come to a bitter end?

Frankie, a mother separated with her young daughter during the lockdown, is also trying to connect to her lesbian lover, Eli, who is based in the U.S and busy as a medical staff. Their constant zoom conversation shows their fear for their personal relationships and future.

Greg, an old professor who’s living a routinary life suddenly gets a knock on his door. It’s Harold, a free spirited young guy. Both heartbroken, they spark a meaningful conversation about life, love and possibilities.

Kyle is desperate to bring her stranded OFW mother Jack back home that he uses his body to earn money because of the lack of opportunities brought about by the lockdown. When he goes viral online for his ‘noble’ reason behind what he’s doing, he is caught up in a dilemma between right and wrong as he examines his real motivation behind his actions? Is he really doing it for the love of her mother or for the love of himself?

Kyle is trying to finish his screenplay while on quarantine. He starts to feel and see weird things in his place until he faces an exact facsimile of himself. Is the double a projection of his self, a figment of his wild imagination or a manifestation of his psychological breakdown? What follows is a spiral between fantasy and reality.

Luke loses his father to CoVid and has now a chance to reconnect with his father’s lover, Matt. The visit brings back memories and pains the two experienced in the past. Will they be able to finally forgive each other and move on from the sins of the past?

Neo, a shy and mute young boy and Omar, a mischievous teenager are forced to live together during quarantine. Their cat and mouse banter evolves into some sort of budding bromance - complicated by the accidental chance of an innocent kiss. 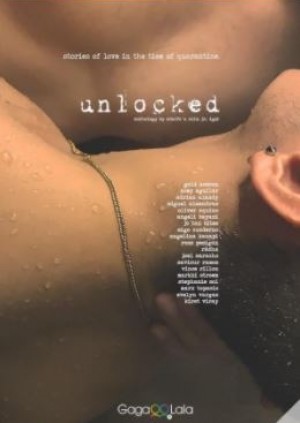