ONLY FOR PHILIPPINE TERRITORY.

Director's Cut of FIVE Horror Movies for the price of ONE! ONLY ON SINISTER FILM FESTIVAL ON KTX.

Synopsis: In this twisted horror anthology, five strangers are drawn to an abandoned theater and forced to watch their darkest fears play out before them.  Lurking in the shadows is The Projectionist, who preys upon their souls with his collection of disturbing films.

Nightmare Cinema as a whole is the bloodiest, most violent, most gruesome and most twisted movie I've seen this year. And I mean that mostly in a good way. – Chicago Times

An old man, fated to collect souls for eternity, seeks atonement after trading his daughter's soul.

3) THE DEVIL’S WITHIN (Director’s Cut)

A reality television crew, whose show features stories about drug addicts, finds that their 16-year-old junkie for their latest episode might actually not fighting addiction, but a demonic possession.

A group of thieves have the tables turned on them during a home invasion. Hidden in the basement they find the remains of secret viral lab experiments gone savagely wrong. Now they must escape before they are infected with a new strain of virus that turns its victims into mutated psychopaths.

The spirit of an Apache warrior takes possession of a young woman's body, murdered by a gang of rednecks. Now among the living, she seeks revenge, as the clock ticks away on her decomposing body. 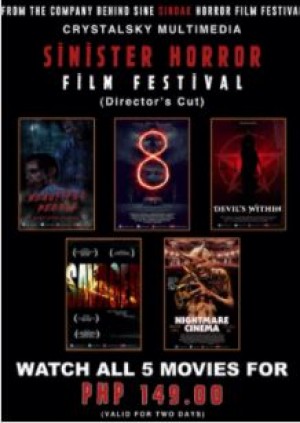