The year’s biggest OPM digital concert is coming from producers RS Francisco and Sam Verzosa of Frontrow, the company behind the epic “ALL-IN” event featuring the biggest showbiz stars and an audience of more than 50,000 at the Philippine Arena in 2019.

Titled EVOLUXION, the show is the first major concert of Ex-Battalion, the Philippines’ biggest hiphop group with a total of over 1 billion accumulated views and over 4 million subscribers on YouTube alone. Staged at the Araneta Coliseum and various remote locations, the 3-hour live concert special features all the group’s signature hits and other recordings performed live like never before, backed by a full band under award-winning musical director Raul Mitra.

EVOLUXION will also mark the first time the group will talk about their inspiring personal rags-to-riches stories as they retrace their journey to stardom.

The show highlights Frontrow’s continuing commitment to support and promote world-class Pinoy talents and productions. It also marks a milestone in the company’s two-year partnership with EXB.

EVOLUXION will stream live in ktx.ph on December 11, Saturday, at 8pm. 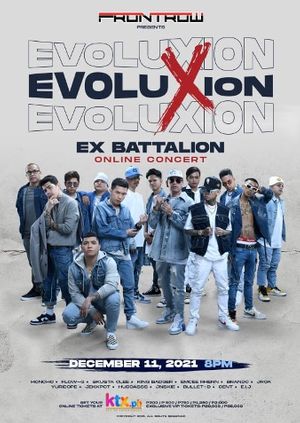