Feliza (Elizabeth Oropesa) a widow brings her 17 years old daughter Maria (Sharmaine Arnaiz) to work as maid to Rosendo (Ronaldo Valdez) and Magdalena (Nida Blanca), to repay the debt left behind by her husband. In the course of work, Rosendo notices Maria’s innocent beauty and shapely body. The simple minded Maria does not take any malice in her uncle’s attention and meaningful glances.

One night, Rosendo barges into Maria’s room and take advantage of her. Maria struggles to no avail. Rosendo gives her money to keep quiet. She accepts the bribe thinking that it will benefit her mother who badly needs the money.

The sexual abuse continues over a period of time until Magdalena catches Maria and Rosendo  in the act. Maria escapes from the premises. She confesses everything to her Feliza. Mother and daughter defy their conservative town by charging Rosendo with qualified seduction. It is battle between David and Goliath as the two parties vie for the favor of justice has blinded eyes.

Allan (Ricky Davao) has always been obsessed with Gilda (Chin-Chin Gutierrez). Inspite of being rejected  and Gilda’s marriage to Daniel (Joel Torre), Allan continues to watch over her.

He follows Gilda after one of her class. Allan gets into a minor accident. Gilda sees him and feels pity. She helps Allan, who in turn offers her to have snacks as a way of repaying her kindness.

While eating, Allan secretly puts a drug in Gilda’s softdrink. He brings her to a motel and rapes her. Gilda gains consciousness and realizes what has happened.

Gilda tells her husband Daniel what happened. With the support of her family and lawyer Lilian (Gina Alajar), Gilda files charges against Allan. However, the case drags on and on because of the influence of Allan’s family who are very prominent in their town.

Gilda discovers she is pregnant and Allan is responsible. Daniel does not abandon Gilda, and stands by her side until the baby is born.

Allan is eventually convicted. He pleads to Gilda for a chance to see his son. She refuses. Years later, Gilda and Daniel prepare to leave town to start life anew somewhere else. She relents and shows her son to Allan, but does not introduce Allan as her father. 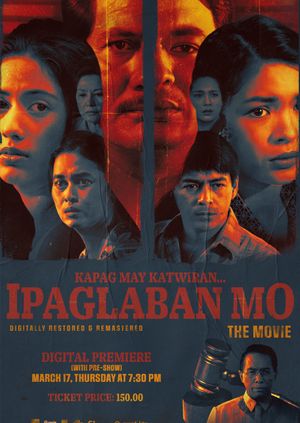